Seahorses are seriously cool. They’re some of the ocean’s quirkiest critters. But are they horses of the sea, or are they fish? Check out our fabulous facts to learn all about them.

Then, we’ll let you in on a secret. The secret is all about where you can scuba dive with seahorses!

Seahorses Would Never Cheat On You

A seahorse would never cheat on you. Seahorses are monogamous. That means they have one partner and mate for life. No cheating, no flirting with anyone at the bar. It’s quite the ritual to get there, but once they’ve partnered, that’s it! They have a complex mating ritual which involves a glorious eight-hour-long dance-off. Then that’s it, they’re sorted until the end of time.

They could beat you in the local rib-eating contest. Well not literally. They don’t eat ribs, and they can’t breathe on land. But they do eat an awful lot, that’s the point. They graze 24/7, eating more often than not. Food moves so fast through their bodies, that they don’t have time to take in any nutrients. Some seahorses can guzzle over 3,000 shrimps a day. Where do they put it?!

Every Seahorse Has A Unique Thumbprint

Their mothers say they’re special. And they actually are. Every seahorse is as unique as a thumbprint. They have individual markings on their crown, known as a coral net. Much like whale sharks and manta rays, they can be uniquely identified.

Males give birth. Kind of. The females are still the egg carriers and do most of the hard work. But after the eggs are fertilized, they deposit them into the male’s pouch where they can safely gestate. Then, when they’re ready, the males expel them from their pouch, and the lil’ seahorses are ready to take on the world! This could be anything from five to 1,500 baby seahorses each cycle. So it’s still the females who’re giving birth, but the males are involved in the final stages!

They’re queens of camo. You’ve probably been in the water with more seahorses than you know, but you haven’t spotted them! They’re expert blender-inners. Ever heard of Denise Pygmy Seahorse? They hide in gorgonian corals, and blend in so well, only those with the most eagle eyes will spot them. Can you see it yet?

They’re experts at cross-eyes! Seahorses’ eyes move independently of each other. That way, they can stay put, in the comfort of their camo coral, while keeping an eye on their surroundings and staying safe.

They’re not very tasty. Crabs are a seahorse’s main predator. But most other creatures find them indigestible because they’re so bony! Even so, seahorses swim upright to mimic underwater plants, avoiding predators. Humans, of course, are also their predators. Not for snacks though – for the aquarium trade or as souvenirs. Sad.

They’re terrible swimmers. Considering they live in the sea. Seahorses have a little fin on their back that propels them – it flutters 35 times a second! Their even smaller pectoral fins are used for steering. But most often, they move around with their strong curly tails. Because of their average swimming skills, they often die of exhaustion in stormy seas.

Seahorses And Their Tails

Seahorses use their tails like horses. Well, horses use them to swat flies, and seahorses don’t do that. But they do use their tails. To cling onto seaweed and corals, as anchors during strong currents, and even as a fighting tool! Once they’ve found their mate for life, they swim along with them, hand in hand, or shall we say, tail-in-tail!

They are indeed, fish. They have all the things that are required of a fish. That includes a swim bladder for buoyancy, gills for breathing, and fins for swimming. Tick, tick, tick!

Where to swim with seahorses

There are some epic places to go scuba diving with seahorses. All over the world, you can swim and snorkel with the little critters. Here are our top five seahorse spots!

South Australia’s fresh (fresh as in a polite way of saying very cold) water is home to the short-snouted seahorses and the potbelly seahorses! Two of the most fascinating species of seahorse.

But that’s not even the half of it! Down under, you might even be lucky enough to meet the seahorses’ cousins, seadragons! Their beautiful relatives, weedy and leafy seadragons are found in very few places in the world, and this is a hotspot.

Around the 17,000 islands of Indonesia, there are many-a-seahorse to swim with! Indonesian liveaboards will definitely help get to the seahorses. The favorites in this part of the world are the pygmies, which grow to about 2cm long and hide like experts in gorgeous colorful corals.

The Galapagos Islands are home to hundreds of endemic species. This means animals which are from there, and only live there! The Galapagos Seahorse isn’t actually one of those.

Also known as the Giant or Pacific seahorse, the only known oceanic island population occurs around the Galapagos Islands. These beauties can be spotted on the popular Los Tuneles snorkeling tours. Here, you can weave your way through the underwater lava tunnels formed by the historic volcanic eruptions of Ecuador!

Galapagos liveaboards are a great way to get up close and personal with seahorses.

Eleuthera, one of the largest islands in the Bahamas is home to a very special species of Seahorse, the lined seahorse. They’re threatened, but they live in the masses in Sweetlings Pond, a landlocked lagoon.

If you’re lucky enough to snorkel here with them, perhaps it’ll take you a while to spot your first seahorse. But once you’ve spotted one, you won’t stop being able to see them everywhere!

Perhaps a little off the radar, Myanmar is a top spot for scuba diving with seahorses! It’s home to the gorgeous tiger tail seahorse, named after its crazy cool striped pattern.

The biodiversity of the Mergui Archipelago is no longer a secret, of course. There are plenty of rare species and awesome underwater adventures to go on here!

Seahorses are quite amazing little creatures. From the tiniest pygmy species all the way up to the giants, they come in many shapes and sizes. From potbellied to long-snouted, to tiger tailed! They’re something one of the ocean’s many marvels.

If you’re lucky enough to ever swim with seahorses or go scuba diving with them, respect their space. Seahorses are very sensitive little creatures, and harassment by humans is bad for them. They turn away from bright lights, so use a red filter on your dive light to diffuse it, and help you get better pictures, and keep seahorses happy!

As they’re not very good swimmers, be careful not to ‘fin’ at them too hard. The pressure changes can cause them problems. If you waft too hard and they’re not secured onto a coral or seaweed, it makes swimming back to safety very difficult for them.

So there you have it, everything you need to know about seahorses. From fun facts to top scuba diving spots! Happy bubbles. 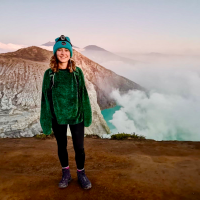 Tash Editor
Sorry! The Author has not filled his profile.
email
tashgraceallen@gmail.com
follow me