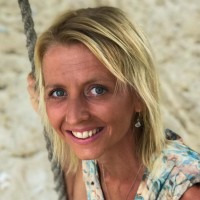 Alexa Worswick is a PADI + SSI scuba instructor, experienced freediver, and travel writer. With over 15 years of scuba diving experience in many locations across 3 different continents, she's now based in Indonesia.

Scuba diving in Socorro is a parade of the world’s most exciting marine megafauna.

Often referred to as The Galapagos of Mexico, this pelagic paradise is one of the world’s top scuba diving destinations.

Located 250 miles off the west coast of Mexico, Socorro is the largest of four islands that make up the Revillagigedo archipelago.

More commonly known as the Socorro Islands, this uninhabited archipelago is one of the wildest places on earth, both above and below the water.

But because of its isolated location, scuba diving in Socorro is only possible on a dive liveaboard. To learn more about liveaboards specific to Socorro, check out our guide!

As one of the lesser-known of the world’s best scuba diving destinations, it’s not always easy to find information on diving in Socorro.

And that’s why we’ve put together a complete guide to scuba diving in Socorro.

So let’s dive in.

Why go Scuba Diving in Socorro?

If you’re looking for mind-blowing encounters with all the bucket-list marine life, scuba diving in Socorro is a must!

Socorro is one of the only places in the world where you can dive with almost all of the biggest animals in the ocean.

No matter what species you’re longing to encounter, scuba diving in Socorro will make all your underwater dreams come true.

Whale sharks, oceanic manta rays, schools of hammerheads, oceanic whitetips, dolphins, humpback whales, and more! The list of what you can see diving in Socorro is like a ‘who’s who’ of the ocean’s heavyweights.

But it’s not just the variety of big marine life that makes diving in Socorro so spectacular. It’s the up close and personal nature of the encounters that makes scuba diving here truly remarkable.

With so few visitors, the marine life in Socorro has remained surprisingly curious.

Unlike other scuba diving destinations where most of the big animals will keep their distance, in Socorro they actually want to be around divers.

Many will welcome you as you descend and often follow you for the entire duration of your dive. It’s these unforgettable and intimate that make scuba diving in Socorro so incredible.

What’s more, all of this mind-blowing pelagic action takes place against a dynamic backdrop of volcanic topography alive with geothermal activity.

Because Socorro can only be accessed by a liveaboard, all of the diving here is from a boat. You’ll gear up on the main dive deck before jumping into a small tender which will drop you at the perfect spot based on the conditions.

The water temperatures in Socorro range from 70 to 82°F (21 to 28°C) with December to April being the coldest months. So if you’re planning to enjoy 4 dives a day, make sure you pack a thick wetsuit and hood!

The visibility in Socorro is surprisingly good compared to most scuba diving destinations in the Pacific. Depending on the season, plankton bloom, and site, visibility will range from 50 to 98 ft (12 to 30m).

Due to its remote and open ocean location, Socorro is exposed to the full force of the powerful Pacific currents.

While this brings a lot of the pelagic action, it also means that the diving conditions here can be challenging and unpredictable. Surface conditions can also be quite choppy.

Therefore, scuba diving in Socorro is only recommended for advanced divers with experience in strong currents.

What can i see scuba diving in Socorro?

Don’t expect to find vibrant reefs in the Revillagigedo archipelago. The underwater landscapes of these Jurassic-like islands feature intricate rock formations and chimney-like lava tubes. But what it lacks in colorful corals, it more than makes up for with big bucket list animals.

So if you’re looking to tick as many shark ‘firsts’ off your list, then Socorro is the place to be. And we’re not just talking about catching a glimpse of a shark in the distance. When diving in Socorro it’s common to see vast schools of sharks patrolling in the deep.

Socorro is home to a huge number of oceanic manta rays, with many individuals reaching over 6m in wingspan. Unlike anywhere else on earth, these gentle giants approach and often accompany divers. Similarly, the resident pods of bottlenose dolphins will playfully circle you as you cruise with the current.

There are also many smaller scale delights that are equally as exciting. Socorro is home to enormous schools of trevally, wahoo, jacks, and the largest yellowfin tuna you’ve ever seen!

And last but certainly not least, Socorro is one of the only places in the world where you can swim with humpback whales! Even if you don’t see them, you’ll usually hear them singing on every dive during their migratory months.

Best Time To Dive in Socorro

The best time for scuba diving in Socorro is between November and May. These months offer the best sea conditions and the highest chance of big marine life encounters. Plus the weather is usually sunny with only the occasional rain shower.

Although oceanic manta rays are present throughout the year in Socorro, the majority of shark species are only spotted during the winter months. Plus as Socorro’s waters begin to cool, the plankton starts to bloom. This attracts hundreds of migratory whale sharks to the area, especially during the full moon.

The best time to see humpback whales in Socorro is between January and April when thousands of them come to breed and calve in the area.

From June to October, the sea conditions are too rough for liveaboards to get to Socorro. And the water temperatures rise meaning that most of the pelagic fish head off to find cooler spots.

Honestly, all of the dive sites in Socorro are seriously spectacular. But here are a few of the all-time favorites to whet your appetite.

Around 64 miles (40km) from Socorro island, this small pinnacle rises from the seafloor at 50m (164ft) all the way up to the surface. This dive site is quite literally a magnet for all the big marine life.

Although the site itself is quite small, the pelagic encounters are so prolific that this incredible site will have you dying to drop in again and again. Every dive at Roca Partida offers a different, yet equally mesmerizing experience. This site is not to be missed when scuba diving in Socorro.

San Benedicto is the third largest of the Socorro Islands and famous worldwide for its unbeatable manta ray encounters.

And we’re not just talking a quick glance at a passing manta ray or two. Or even a manta ray swirling around you a couple of times. But a succession of extended and intimate interactions with several gigantic Pacific manta rays.

The Boiler is the very best dive site in the Revillagigedo archipelago for experiencing this manta magic. Named after the swirling surface conditions, this magnificent pinnacle rises from 165ft (50m) to within 20ft (7m) of the surface to create a popular cleaning station full of hungry angelfish.

The ginormous oceanic manta rays that gather here seem to welcome scuba divers, making close eye contact as they swim by to enjoy your bubbles. Other marine heavyweights also gather at this cleaning station including tiger and whale sharks. And if you’re really lucky the humpback whales will make an appearance. Even if you don’t see them, their song provides the perfect soundtrack to an unforgettable dive.

Often referred to as Hammerhead Central, Roca O’Neal is the best dive site in Socorro for spotting scalloped hammerhead sharks.

Gazing out from this rocky slope you’ll quickly lose count as a vast school of hammerheads weaves its way into the current. There’s also a good chance of spotting gray reef, silky and Galapagos sharks here.

In addition to the sharks, this dive site also features a stunning cavern which is one of Socorro’s most photogenic topographical features. Above which is a shallow plateau where you can find some interesting small critters.

Cabo Pearce is a reef stretching out from the east coast of Socorro Island which offers unrivaled dolphin encounters. Very few places in the world can offer the same experience of scuba diving with dolphins as this dive site.

Not only will you be greeted by a pod before you even enter the water, but it’s also likely they’ll hang out with you for the entire dive. Even when you can’t see them you’ll hear their playful squeaks and clicks.

You also have a strong chance of being entertained by majestic manta rays, silky sharks, and hammerheads playing in the current. And if that’s not enough it’s also common to spot a humpback whale cruising past.

How To Get To Socorro

You can only access the Socorro islands on a liveaboard. Socorro liveaboards will usually depart from San Jose del Cabo or Cabo San Lucas at the southern tip of the Baja Peninsula in Mexico.

The crossing takes around 24 hours and can be very rough. So make sure you bring seasickness tablets. It’s a long journey to reach these far-flung islands, but the pay-off is well worth the effort.

Due to its rich and unique biodiversity, the Revillagigedo archipelago is classed as a UNESCO world heritage site. Biosphere regulations prohibit divers from using gloves, knives, or lights. However, lights for underwater cameras are allowed.

Keep in mind that the best time to dive here is also the coldest. Bring plenty of exposure protection, both for during and between dives. Especially if you want to get as many dives in as possible.

Socorro island is a naval base and occasionally closed to scuba divers due to military operations.

If you’re new to scuba diving it’s recommended that you gain some experience diving in currents before heading out to Socorro.

Socorro is a destination that only a handful of intrepid divers make it to. But it is most certainly worth the trip.

There really is nowhere else on the planet that offers such breathtaking underwater moments as scuba diving in Socorro.

And if you’re ready to embark on the underwater adventure of a lifetime, then it’s time to check out the best liveaboards in Socorro.

Alexa Worswick is a PADI + SSI scuba instructor, experienced freediver, and travel writer. With over 15 years of scuba diving experience in many locations across 3 different continents, she’s now based in Indonesia.